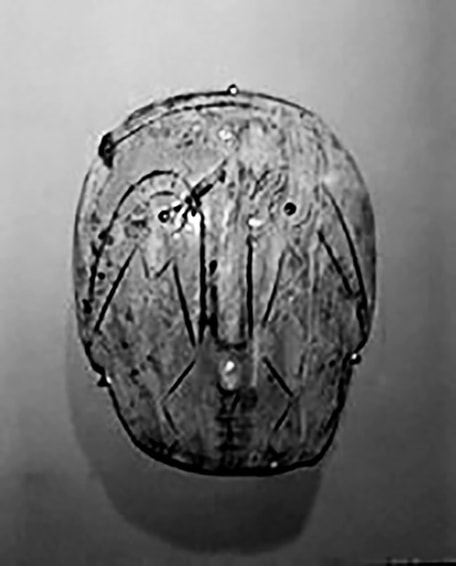 (Pictured above is the Crying Eye design shell mask gorget found in the excavation of the Hardin Village Site)
One of the projects of the Roosevelt Era’s Works Progress Administration (WPA) was the excavation of the Hardin Village Site, located in Greenup County along the Ohio River, eight miles upstream (east) from the mouth of the Scioto River. Supervised by C.T.R. Bohannan, the dig took place in 1939 from February to October.

Attributed to the Fort Ancient Culture, Bohannan determined there were four different occupations of the site between the dates of 1450 A.D. and 1680 A.D. with the last occupants being directly related to the historic Shawnee Tribe.

According to the University of Kentucky Press publication, Studies in Anthropology, No. 4, The Hardin Village Site, by Lee H. Hanson, Jr., the project was conducted under the imminent threat of the discontinuance of the WPA program. Bohannan worked on a day-to-day basis, without the benefit of a long-range plan, as well as being under pressure from the site’s owner, W.F. Hardin, who wanted to plant his crops. Because of this all the trenches and excavations, except those by the river, were filled in and abandoned early in the year. Only 1.1 acres of the total 11.4 acre site were excavated. Even with those limitations and the short time they had to work, 9 structures, 301 burials, and more than 25,000 artifacts were found before the project was closed.

Below are some excerpts from Bohannan’s field log which paint a vivid picture of the conditions under which he worked.
“Tuesday, February 21, 1939
Cloudy, cold. Project sleeted out at 2 P.M……

“Thursday, April 27, 1939
Hardin is extremely anxious for us to close up all extensive trenching………….

“July 1 – July 4, 1939
Crew laid off completely, as per orders from Washington, so spent these four days watching the site, to keep the cross-river folk from carrying it away.

“July 5, 1939
Inasmuch as it would have been impossible to get an ‘unhungover’ crew today, did not attempt to work project (similar troubles after each payday)……..


Hanson says that despite the handicaps of the WPA labor regulations, bad weather, and an overabundance of material, features, and burials, Bohannan did a thorough job of recording what he found.

Hanson’s interpretation of Bohannan’s data says indications are that the entire population of the village abandoned the site at roughly the same time most likely because of the incursion of the Iroquois into the Ohio Valley. The site was never reestablished as an occupied village, even after the Shawnee returned to the Ohio Valley around 1730.